skip to main | skip to sidebar

My very first attempt at KALE and I made kale chips tonight.  Seasoned with salt & pepper and dried in my wood-fired oven.  Actually much better than I expected!  half of it never made it to the bowl: I ate them right at the oven!
Have you made kale chips before?  What other seasoning would be great? 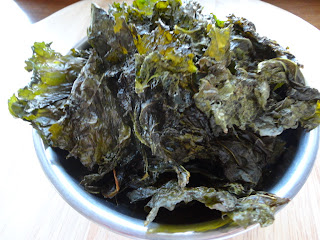 Oh my! Sorry for the lack of communication.  It's been so long and I have so many things to catch up on.....  Let's start now with a evening photo I took last week,  My previous post was about never getting tired of the sunrise sky, well this one is about the night sky.  And a campfire to warm up the chilly evening!  I wish I had my regular camera at the time because the moon had a perfect crescent shape.  Unfortunately, my mobile phone is not the greatest to capture details.  But here it is, the moon over beautiful Popham Bay. 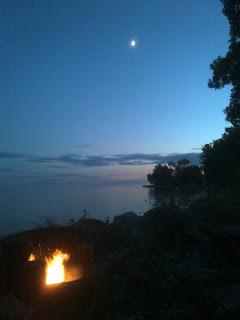 I never get tired of the sunrise! 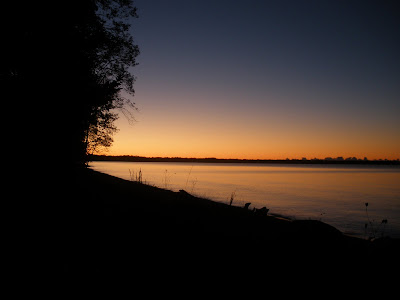 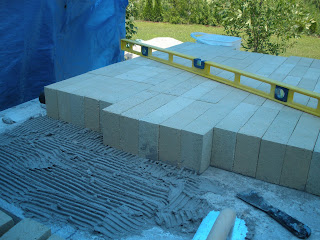 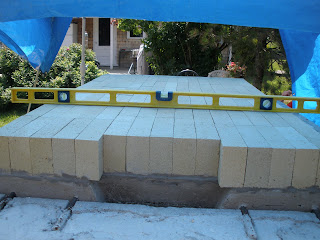 We took a break for the entire month of June; I was busy gallivanting in Europe so we installed a makeshift tent to protect us, and the oven, from the harsh sun of July!
We did a mix of fireclay from Tucker's Pottery and some brick sand. We had to screen the sand to make sure it was free of small stones and to get rid of some weeds which grew in it over the past year. What should I expect: I had the sand delivered a year ago.....
The layer is rather thin and its purpose is to level the bricks; it's not really acting as a glue.
Once all the bricks were placed properly, I realized I miscalculated the void needed for the ash slot. Because I use 10" wide cement blocks to do the base, it made the hearth slab slightly narrower so I couldn't make the oven floor as wide as Alan Scott's plans were depicting. Not a real problem, we'll reshape the ash slot at a later step.
I selected the firebricks from Alphatherm and they are of medium duty, 9 X 4 1/2 X 2 1/2". Since then, I found some locally but they are much smaller; it would have made the project much longer: more bricks to level!
Posted by Annie at 5:37 AM 7 comments: 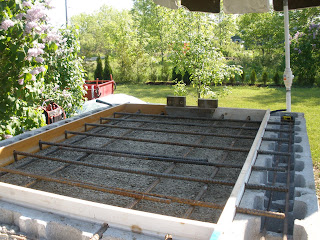 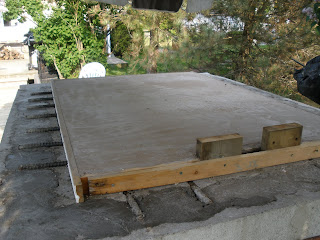 We had precut the 5/8" rebars so that we wouldn't waste any handling time. We positioned them as soon as the heartn insulation was leveled and tied them with a small wire and we are ready to pour the slab!
All around is a 1" piece of wood that will create an air gap necessary for any expansion of the hearth slab during heating. This wood frame also provided the height needed, 3 1/2" thick for the hearth slab.
The slab is made of Lite Kastite refractory concrete supplied by Alphatherm in Toronto. Another alternative would have been to use a mix of Portland and lime but since Jim Wills suggested the Kastite for a stronger slad more resistent to heat cycle, I went with the expert's choice!
If I'm going to go into the trouble and time to build this bread oven, I might as well not skimp too much on the materials. This oven will still be standing much longer after I'm gone!!!
And by the way, this was done on May 26 of this year. My dad visited often this summer allowing us to accomplish a lotvon the built. As I'm writting this post, I'm preparing for his visit this coming week-end; I have great hopes to convince him to visit one more time before the winter and to finish the oven.......
Posted by Annie at 8:23 PM No comments: 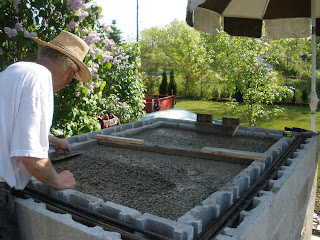 On the plywood support, we poured a 5:1 mix of vermiculite and Portland cement to have a 2" thick layer. This will be the first layer of insulation for the suspended hearth slab. After a few months of use, we will insulate further from the bottom. At the far side, you can see the void for the ash slot. We had to work fast to pour the hearth slab on top the same day to ensure proper bonding between the 2 layers. We also poked a few galvanized nails at a 45 degree angle in the vermiculite layer to increase the bond.
Funny how it looks like my dad is working alone......
Posted by Annie at 8:15 PM 2 comments:

A WHAT?? Wood-Fired Oven! Seriously?

Just thought I’d add this photo: Dad surveying the work to be done and probably wondering what possessed his daughter to start such a large scale project……. 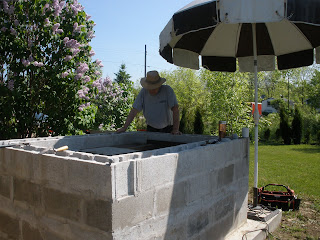 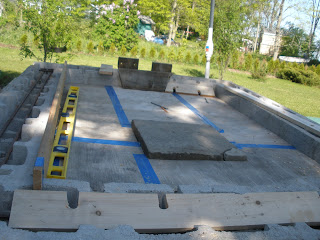 After last winter, our first order of business in May was to create a wood support for the hearth. Although it is to be a suspended hearth, we built a center pillar with cement blocks to provide additional support. The pillar top had to be in the middle of the hearth insulation layer so we had to build up the height a bit. Unfortunately, the corner broke when we removed the form, but it will not affect anything as it will ultimately be inside the insulayer layer.
The bottom of the insulation layer is build with pieces of plywood we recycled from the yard; we could have done it in only 2 pieces but the smaller pieces meant for easier removal.
At the far end of the photo,you can see we built a shape to create a void for the ash slot; you will see it better in the next steps. The ash slot will allow me to rake the ashes out of the oven and let them fall under the base; much easier removal.
At the forefront is the wood frame that will be used for the next step: the hearth slab, and the grooves at the top of it will support some rebars and create a 1" air gap between the hearth slab and the cement block walls, so that the hearth slab has some room for expansion. It's easier to prepare for the next step right away because the hearth slab should be poured the same day as the hearth insulation layer to help the bonding between the two layers.
Posted by Annie at 9:51 PM No comments: 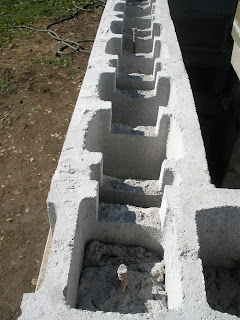 This was the last step we worked on before we wrapped up everything for the winter last October: we weren't prepared to work in less than perfect weather so we called in a day.
As mentioned in the previous post, this is a photo of one corner with a rebar and filled with cement mix after chipping some of the core away to make room for more rebars.
I'll share the spring status in the next post; a winter has never gone so fast!!
Posted by Annie at 9:14 PM No comments:

Do I have a lot of updating to do!! I haven’t posted anything on the build since last August but that’s not an indication of what’s happening: I’ll try to speed-up the updates in chronological order to get you as fast as possible to the current status.
In September of last year, we raised the cement block foundation to 4 ½ courses. I decided at the last minute to add half a course because I wanted the floor of the oven to be at a comfortable height for me; I suspected that the plan I was following was a tad too short. I’m glad I did that.
We used type S mortar for the cement blocks and we filled them at the end with regular concrete mix with some small pebbles from the beach, as well as vertical ½” reinforcing bars at every corners and every other foot or so. As you can see, we put some recycled metal screen before the last course to avoid filling every cement block core all the way down to the slab. The spaces without the screen pieces will have a vertical re-bar in the cement block cores.
The lintels or iron angles are to support the last course above the front opening of the block base. I should mention now that the opening of the block base is NOT where the fire will be! Most of my visitors get confused but you will understand much better when the project is more advanced. Right now, it looks like a big square pile of cement nothings! Stay tuned! 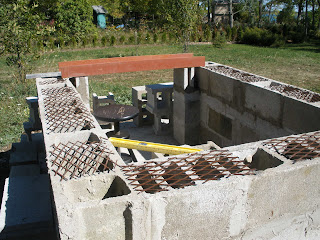 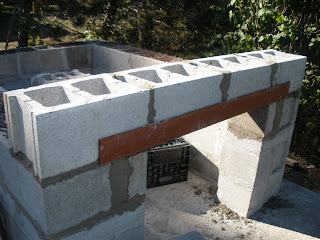 I Stopped to Smell the Roses Tonight 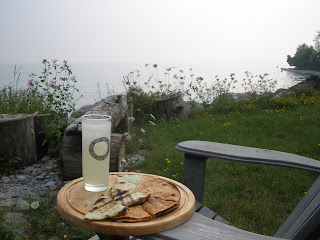 Time to de-stress and enjoy the surrounding beauty! Very hot & humid today and probably not the best time to enjoy piping hot chipotle & cheese quesadillas, but oh boy, where they ever good!! So simple to do: the idea comes from my friend, chef Pat Forster, and they were a favorite menu addition to my BBQ party this summer. Take one can of chipotle pepper in adobo sauce and puree in food processor, smear a thin layer on a soft tortilla, fill half with your favorite grated cheese and then fold in half. You could make it a meal by adding roasted chicken pieces in it. Lightly oil the quesadilla before putting it on the grill to warm up. They can also be done successfully on a panini press and that's how I enjoy them, at work for lunch. And it's a margarita hidding in that tall lemonade glass, the perfect companion to spicy quesadillas!
Posted by Annie at 7:55 PM No comments: 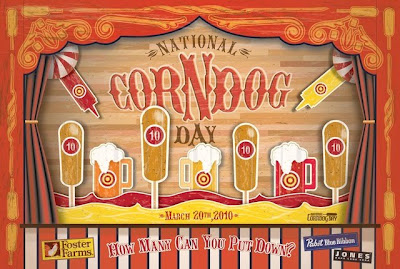 I Want Green Pastures instead of White Lawns!

Gardening season is almost upon us! Well, maybe it’s a bit delayed by the snowstorm we got last Thursday but nonetheless, it’s great to start planning the veggie garden. This year, I think I will step out of my comfort zone and try new varieties. Potatoes are the first thing on my mind: I love fingerlings but I’m too frugal to pay the supermarket prices. However, I have no clue of what to do to grow potatoes! Is there anybody with advice for me on how to grow (hopefully successfully!) potatoes?
Maybe my title for this post should have been Green Acres…..My life is starting to look a lot like it! 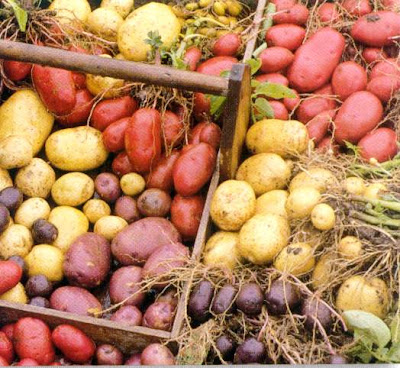 Vacuuming is the very worst chore for me. And with the additional cat in the household, I find the need to vacuum more often. My my, what a nightmare. Billy leaves little balls of fur everywhere and they are difficult to pick up because they stick to your finger and won’t let go!! The electric brush of my vacuum gave out last week and I was glad to still have an old Hoover in the garage. This one’s electric brush is working very well but it’s so large and difficult to maneuver. AND it has old fashioned bag!! I got used to the bagless technology the last few years. A co-worker gave her son the New Dyson DC23 Animal version for Christmas and I have to admit that I’m green with envy….I’m very hopeful I will get one too with Northern Mama’s great giveaway! Good Luck to me! ♣
Posted by Annie at 8:12 PM 2 comments: 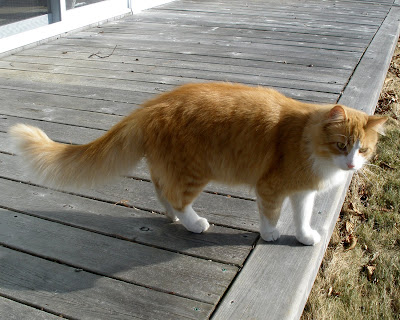 In order to keep up with the single woman typecast, I added another cat to our household! Billy is a year old and was raised with a dog; that’s probably what attracted me to him. It shows good dispositions and that’s very important. Although he seemed quite independent and had no problem spending long amount of time exploring the outdoors, he also keeps close by if I’m outside or just follows cat #1, Nita around. Today was the day he was being neutered. That’s the responsible thing to do but I’m also hoping that will be the end of the spraying he’s been doing around the house to mark his new territory. So far, so good with Nita; although I must say this week was a bit more difficult: lots of fighting and loud meowing. I’m hoping we’ll all get along nicely soon! 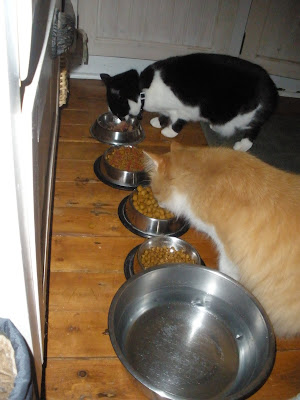 Weather ~ Here and There

Use the pull down menu to check the weather in 4 other cities.

Books I read Again and Again....